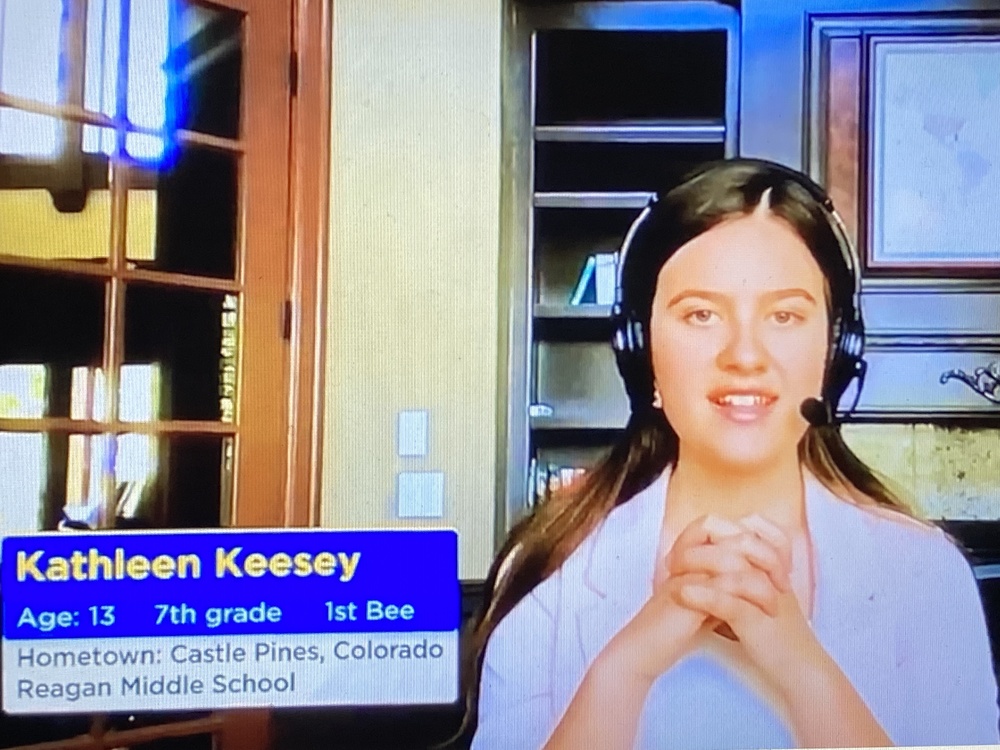 On June 15, 13-year-old Kathleen Keesey, a two-time champion of the Lee-Ogle-Whiteside Regional Spelling Bee, advanced to the final 30 contestants of the Scripps National Spelling Bee. Keesey now advances to the national semifinals on June 27, which are scheduled to be broadcast on Sunday, June 27, 6-10 p.m. (CT) on ESPN2.

Keesey, a 7th-grader and the champion speller from Reagan Middle School in Dixon, is the daughter of Jon and Tara Keesey, formerly of Dixon. After Keesey won the Lee-Ogle-Whiteside Regional Spelling Bee on Feb. 18, her family moved to Castle Pines, Colo. Even though Keesey has moved to Colorado, she is still competing as the champion from the Lee-Ogle-Whiteside Regional Office of Education.

“As far as I can recall,” said Tom Wadsworth, pronouncer for the Regional Bee since 1983, “our area has never had a champion who made it to the top 30 spellers in the nation. Kathleen is making us all very proud.”

Due to the pandemic, all national contestants have been competing by video from their homes with a proctor present. The first six rounds of national competition began on June 12 with 209 champion spellers. By the end of June 15, the six rounds eliminated 179 contestants, leaving only 30 semifinalists, including Keesey.

The 2021 national bee includes spelling as well as vocabulary words. In the six rounds, Keesey has correctly spelled kugel, ponzu, rotifer, and assessorial, and she has corrected defined topiary (a shrub cut into a decorative shape) and laparotomy (a surgical procedure that involves the cutting of the abdominal wall).

This year’s 209 spellers earned their spots as national competitors by advancing through local and regional bees, competing against contestants representing all 50 states, the District of Columbia, Guam, Puerto Rico, the U.S. Virgin Islands and Department of Defense Schools in Europe.

If Keesey reaches the top 10-12 contestants on June 27, she will fly to Orlando, Fla., for the national finals at ESPN Wide World of Sports Complex at Walt Disney World Resort on July 8 from 7-9 p.m. (CT). The final rounds will be broadcast live in primetime on ESPN2.

Other highlights of this year’s national bee:

·      A total of 47 national finalists have previous experience competing in the national finals, and 16 have siblings who are former national competitors.